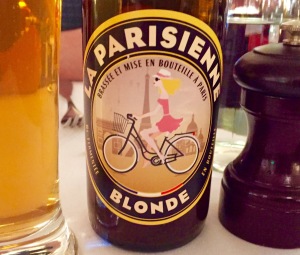 See that girl? The blonde in the cute hat, blithely riding her bicycle on the streets of Paris? The one who smiles with an air of insouciance as she rides across the cobblestones, coolly skirting pedestrians and scooters as she crosses the Seine? That girl is not me. I’m not even sure she exists except on this bottle of beer. Which, by the way, I enjoyed down to the last drop. Right after my harrowing experience of riding a bicycle in Paris.

That is, getting hit by a car while riding a bike in Paris. Husband shook his head, amazed. “It could only happen to you,” he said, as if somehow it was my fault. Which we both agreed it was not. The driver didn’t think it was his fault either, although we begged to differ.

The light was green and I was in the bike lane, one of the rare ones that crops up from time to time at the busier intersections. The driver was turning right and assumed he had the right of way. He cut in front of me as I sailed forth, knocking me off my bicycle in what must have appeared like a moment of pure slapstick comedy. I hit the pavement in slow motion, getting up and dusting myself off a few seconds later, nothing worse than a few bruises and a scraped knee. Horns began to honk and the traffic flowed around us.

Husband rushed over and the driver got out of his car, checking it for damages. No one asked me how I was, apparently a moot point as I was already back on my feet. There followed an authentic French shouting match, replete with curses and insults. I tried to get a word in edgewise as husband threatened to call the police, to take a picture of the license plate. The driver, who seemed to believe the best defense was a firm offense, did not apologize but instead insisted he had the right of way, that he had done nothing wrong. He had stopped, as the law required. He was clean.

I finally managed to get their attention long enough to say that I was fine, merci for asking, that there was no serious harm done but that an apology would be nice. The driver mumbled something and husband backed off. We found a pharmacy and cleaned up my knee.

Then we went for a drink and they served me this. Irony?

In recent years Paris has been taken over by cycling madness. It’s called Vélib – a system of inexpensive bike rentals on every major street corner. It’s all very well for tourism. Who has not dreamed of riding around the city of light like a true Frenchman? Only true Frenchmen don’t ride bikes much – they prefer to drive cars. Along with motorcycles and scooters, buses and taxis. And you want to keep out of their way.

It takes nerves of steel to ride a bike in Paris. If you’re looking for a thrill, you could try bungee jumping instead.