Pity the humble translator whose increasingly challenging job it is to find the words for modern diplomatic language like ‘shithole countries’.

Having worked as a French-English translator in a former life, I can sympathize with those lost-in-translation moments. Often our job is not to literally replicate the words but to find terms that most people will understand to somehow capture the nuance of meaning. Not that the word ‘nuance’ can be readily associated with certain world leaders.

Translating Trump’s recent blunder, in which President Frog* used the unfortunate term to refer to Haiti, El Salvador and various African countries, the French media for the most part took the easy route with the already-coined phrase, pays de merde. An expression often used by the French themselves to describe France, it literally means ‘shit country’.

The proper meaning of ‘shithole’ was picked up by the excellent newspaper Courrier International as ‘trou à merde’. I learned all this from the Guardian, whose frankly hilarious piece details the translation challenges from around the world. Who knew there were countries where birds don’t lay eggs?

But nothing beats the Urban Dictionary, which has updated the definition of the term to its true meaning:

I can’t think of a good equivalent in English but essentially: You said it, you’re it!

Out of the mouths of babes…

* Disclaimer: In carrying out in-depth research for this post, I discovered the Trump-frog chin meme; please note, however, that term ‘President Frog’ has nothing to do with France or the French. The author accepts no responsibility for any sensitive souls who have been offended by this post. 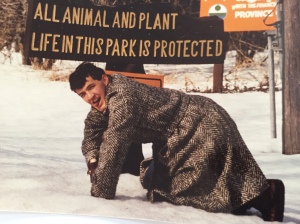 I am not the only one in our family to make bloopers and blunders in an adopted language. My husband, aka Z-Frenchman, is the first one to laugh at his own English. In fact, he’s the first one to laugh at most things. A fine sense of humour is one of his best qualities and at least part of the reason why our marriage has endured these thirty years.

From the time we first met in Toronto, we have always communicated in my native tongue, or a version of it. My French skills were non-existent back then so English was the only option. It is very difficult to change the language of a relationship. Even after living in France for nearly twenty-five years, speaking French together still feels unnatural.

We English speakers find the French ‘r’ challenging and I remember at first getting it stuck in the back of my throat and sounding like I was choking when trying to say ‘rouge’. ZF, on the other hand, found it near impossible to say ‘squirrel’. There are a lot of squirrels in Toronto and it came up a lot. His rendition of it came out sort of all squished together like ‘skweerl’.

English is all about emphasis. Hitting the right syllable remains challenging for ZF even now – he will still put the emPHASis on the wrong syllABle. I described his attempt to tell me about visiting one of our wonders of the world in this post about pronunciation.

While shopping at St. Lawrence Market in downtown Toronto, he was once heard to say: “I take a leek!” That got a few smiles – and at least one anxious look.

The French say ‘take’ a lot as it is a translation of ‘prendre’, the verb used in French to describe anything you buy or order. Breaking him of the ‘take’ habit has been one of my life-long missions.

Another time he advised me: “Do not fall asleep on your bay leaves.” It only took me a minute to figure that one out, along with the French translation: “Don’t rest upon your laurels.” (Ne pas s’endormir sur ses lauriers).

Raising kids in a bilingual family like ours meant that somebody always got something wrong. Howls of hilarity regularly ensued when Daddy made a boo-boo in English, or Maman got something bass-akwards en français.

For the record, Saudi Arabia in French is Arabie Saoudite, not Saudi Arabite.

Most French people have trouble pronouncing English sounds like ‘th’, turning it into ‘z’. The aspirated ‘h’ is also a problem. For some unknown reason, however, ZF often removes them from where they should be and adds them where they don’t belong. Leading to greetings like: “’Ow h-are you?”

Difficulty enunciating certain vowel sounds can still get him into trouble. Piece and piss, sheet and shit are very different concepts.

Plurals are another challenge.

As the ‘s’ is so often silent at the end of words in French, he rarely finds it necessary to add it to the English. He will ask: “Would you like some chip?” Leading one of us to add the punchline: Just the one. Like the elusive ‘h’ he will add s’s where they don’t belong: “We’re out of cereals.” Or imply a plural: “Your hair are looking nice.” I have learned to enjoy the compliment, and keep the correction to myself.

Despite our comical moments, one of which is captured in this photo from our first winter in Toronto, communicating across the language gap has not always been a walk in the park. It makes it easy to misunderstand each other, but perhaps also makes us work a little harder to try and understand the other person’s point of view.

Et toi? What’s your funniest experience of French in English?

I’ve been wanting to say that for a long time. Ever since I arrived in France and found myself floundering in a sea of incomprehension. But something always seemed to get lost in translation. Until I figured out that it’s not Greek but Chinese that describes what the French find impossible to understand. ‘C’est du Chinois?’ I’m sorry but that just sounds wrong.

Spending a week on the island of Crete is the perfect excuse to finally use the expression. We’re here catching a week of sun and making up for the summer that wasn’t in France. Also the vacation we didn’t find time to take. By ‘vacation’ I mean going away to a place with nothing more urgent to do than sit on a deck chair and watch the waves roll in. And decide what to order for lunch.

So here we are in boutique-hotel heaven on the western part of the island near Chania (pronounced ‘HAH-nea’), enjoying mostly sunny skies and warm but not sweltering temperatures. Where they serve delicious, heart-healthy Cretan diet food and excellent local wines – meaning you can eat and drink to your heart’s delight knowing that any weight you gain will be chock full of omega 3’s and antioxidants. Rest assured, I’m sporting the healthiest of belly rolls.

The crowd at our hotel is a mixed bag – Nordic, German, Swiss, French, Brits and the odd North American transplant like me. Everybody speaks an English of varying accents, including the staff, who are Greek and Turkish. I love the fact that English is the default language that enables people from such different cultures to communicate, even on such a mundane level as ‘Please pass the olive oil’, or ‘May I have an extra beach towel?’

And I find myself doing that thing I do. Where I become a sponge for other people’s verbal tics, speaking with an unfamiliar accent or an oddly European intonation. I’m convinced it’s a form of empathy that makes me do this. Either that or an odd desire to parrot.

I first noticed this when I began to speak French. It was as if the process of learning a foreign tongue made me temporarily lose my own. I found myself stuttering to get words out in my native language, or worse, employing French grammatical constructions in English: “She is the sister of my mother,” I explained to someone who asked about my aunt. He gave me a puzzled look. “You mean your mother’s sister?”

Sometimes my English sounded like a bad translation: “I am desolate,” I would say by way of apology, literally translating ‘je suis désolée’ from French. It wasn’t intentional – it just came out that way. I remember feeling very silly after being introduced to someone and popping out ‘I’m enchanted.’ While ‘Je suis enchantée’ may be perfectly correct in French, it sounds more than a little dated in English.

Whatever the reason, being surrounded by foreign languages leaves me temporarily at a loss for words. Which is probably just as well. It is so incredibly beautiful here that words seem redundant. Even the Greek ones with all those strange characters that defy description. You just want to lay back and watch the waves roll in. Wriggle your toes in the sand. And forget about all the things you don’t understand.

Some of my most memorable meals have been in French restaurants. So have some of the funniest translations.

Lamb balls on a skewer? Poor little fellow. That’s got to be a ‘boulette.’ Boulette de viande (literally: a meat ball) as well as a boulette, which also means a blunder.

With the advent of tools like Google translate, even the smallest Mom-and-Pop establishment is able to offer an English menu for non-French speakers. But I’m not sure some of these translations would inspire many guests to order them.

And would you be up to trying some of these Lebanese specialities?

‘Mi-cuit’ is a trendy way of preparing sushi-grade tuna and salmon. But it’s a bugger to translate. ‘Half-cooked’ doesn’t sound like anything I’d want to eat. Partially cooked? Maybe. Seared would perhaps be more appealing. But singed? Non merci.

I was recently at one restaurant that implored me to ‘enjoy a night to remember in our privates dining room.’ Hmmm. Maybe that’s where they serve the lamb balls? Or perhaps his nuts’ salad?

Bottom line: if you’re dining out in a French restaurant and want to be sure of what you’re ordering, you may wish to get an app for that. Or invite a French speaker along to help with interpreting.