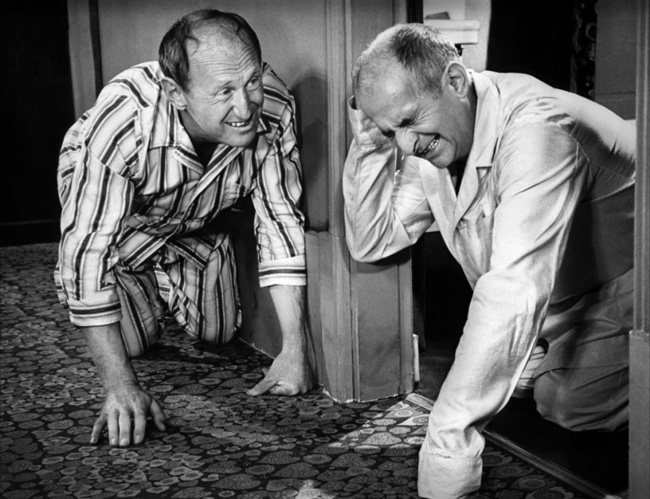 This post is dedicated to the two little French words that just keep on going.

With these two words of vocabulary, you can say a great many things. You can ask if someone’s all right, in general or when they’ve hurt themselves (like Louis de Funès in the above pic), or expand upon them to create an entire conversation.

It’s extraordinary how much nuance can be expressed in those two words.

‘Ça va’, when said in a bright tone of voice, means happy. Ça va bien, super, or even super bien adds degrees of delight. If enunciated with an interrogation or a slight downward lilt, it can mean something less joyful. ‘Ça va pas trop mal’, means not bad, but could also mean not great either. When you get to ‘ça va pas trop’ or the ill boding ‘ça peut aller’, you know things are heading south. Until they stop all together.

Now despite our ups and downs, our strikes and our politics, things in France generally always go. Until they don’t go. Which is to say that most of the time ça va, until suddenly ça va pas. And then – Attention!

When things stop going in France, watch out. There will be drama and sparks will fly. Couples divorce. Heads have been known to roll.

Usually after a dramatic episode of ‘ça va pas’ there will be a healing period of ‘ça va mieux’. Things are not fine but they are a bit better. They are going, which is infinitely preferable to not going at all.

‘Rien ne va plus’ (nothing more goes) was the title of a 1997 French film directed by Claude Chabrol about a couple of con artists. The title was inspired by the expression which is used in the world of casinos, about which I know nothing. Truly. But Google tells me this is what the croupier says when no more bets can be placed on the table.

Of course, you know that the ‘ne’ is usually dropped in spoken language. Just like you know that the word ‘ça’ is actually a contraction of the more formal ‘cela’. Some people prefer to say ‘cela’ to give themselves an educated air. Verging on the ridiculous, like the character infamously played by Thierry Lhermite in the French film classic ‘Le Père Noël est une ordure’.

As for the photo of Louis de Funès, it is from a 1966 film called ‘La Grande Vadrouille’. I’ve just learned it has been remastered and re-released. Not sure if it can be found anywhere to rent online but it’s out on DVD. I intend to watch it, both for the slapstick silliness that the French do so well and the wonderful scenes of 1960s Paris.

Hello winter! #neige❄️ #snow #schnee
Can’t fault the French on presentation. But something suggestive in the chestnut purée…
War memorial in our future home town. #veveyswitzerland🇨🇭
Crystal clear night that drew me out for a walk just as dusk was falling. Hate the time change to winter but this was a bonus! #wintertime #switzerland🇨🇭 #vierwaldstädtersee
Bonne route! #roadtrip #swissalps #bluesky💙
Walk this way. #sundaywalk #swissalps