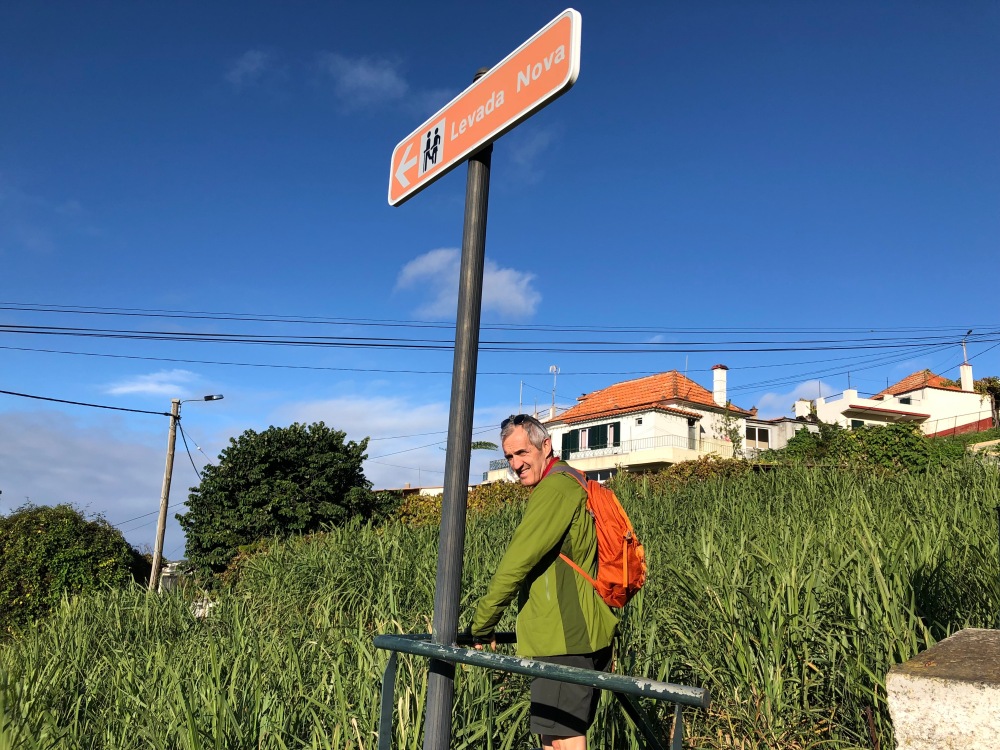 The trail seemed easy enough. The hotel offered a free shuttle ride up to the start of the three-hour walk along ‘Levada Nova’.

Levadas are the irrigation channels that carry water down to the seaside towns from the top of the mountains on Madeira. We were visiting the Portuguese island for an extended anniversary weekend, a mini holiday that we take every year around this time. The weather was perfect: spring-like temperatures with a few clouds and a bit of fine rain. Walking along the levadas is a popular activity for visitors to the island. 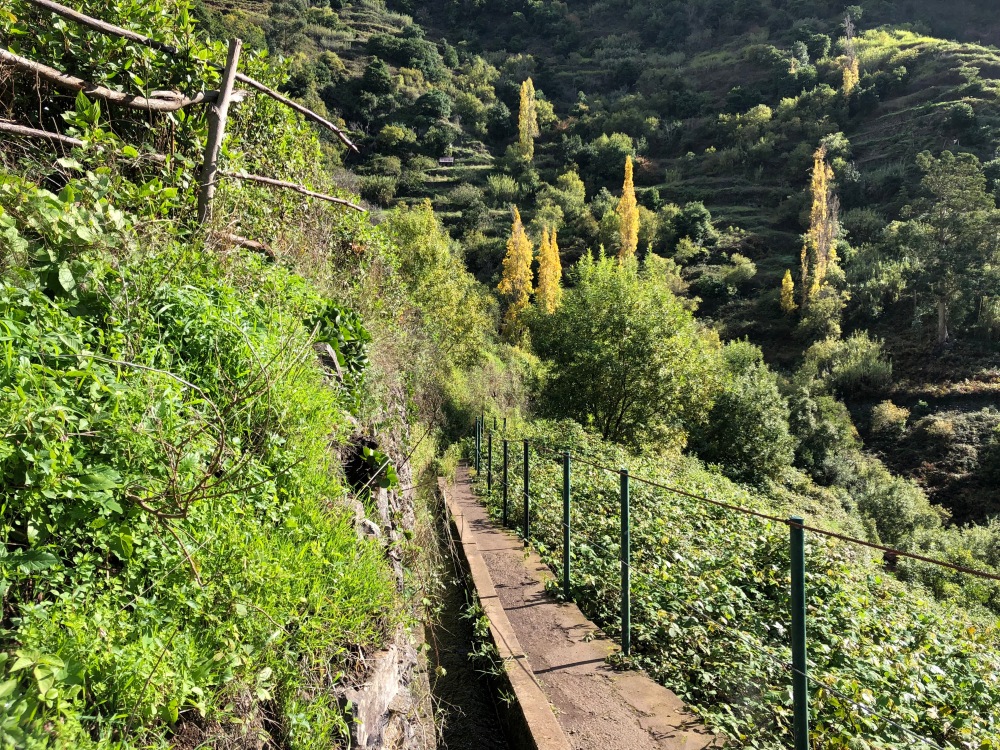 I was wary of getting in over my head, though. The Frenchman I married all those years ago is far more at ease than I am at altitude; he skis and climbs and can keep going forever. I figured we should start small and see how we went. So we chose the easiest trail.

It started out well. The paths were fairly narrow but flanked by lush vegetation of all kinds on both sides. Madeira was once the world sugar cane capital but these days bananas are the more lucrative crop. 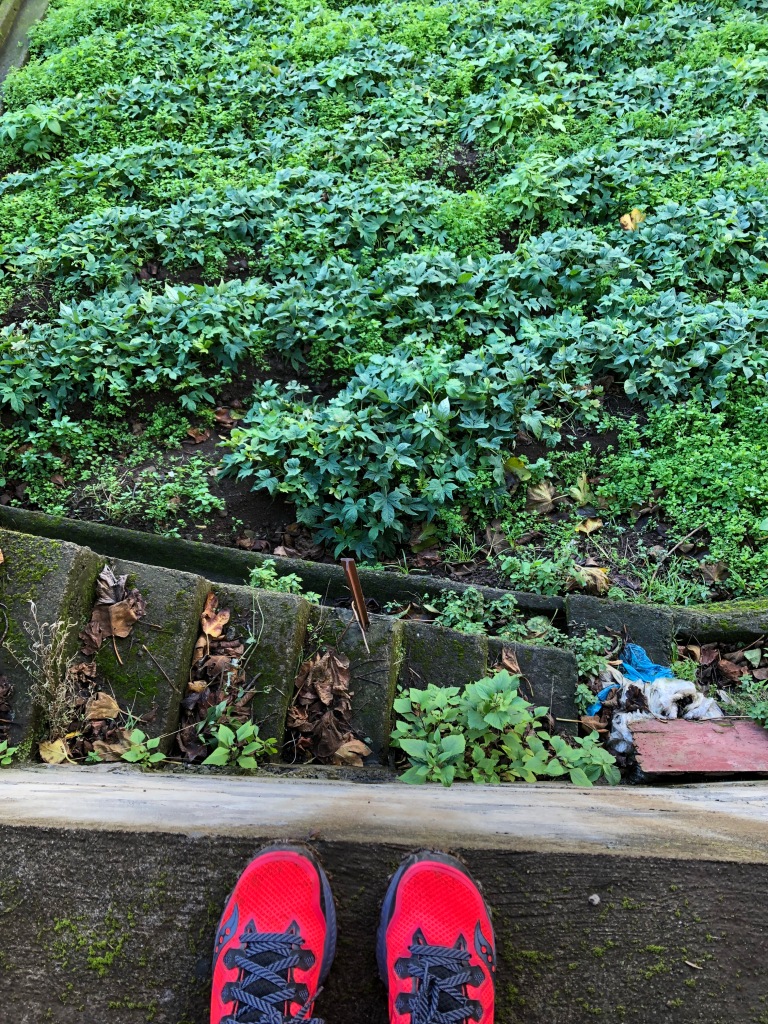 But it quickly got a lot scarier. The narrow path edged along the mountain side with a fairly sheer drop just centimetres away in many places. Where it was steepest, there were barriers — stakes with ropes attached – which provided at least psychological support.

I had to fight my fear of heights to keep going. Coupled with my challenged sense of balance ever since I had inner ear surgery several years ago, the fear of taking a wrong step had me seriously considering walking in the irrigation ditch, lower and away from the edge. But it would have meant slowing down and soaking my feet, so I slogged it out. I was too afraid to stop and take photos of the steepest parts. You’ll have to take my word for it: it was impressive.

We didn’t have a map but had been told the path was clearly marked. No one said anything about a tunnel. Did I mention I also have a fear of the dark, of both open and closed spaces? Basically I am a mess. I thought the man I married thirty-odd years ago would have known this by now. 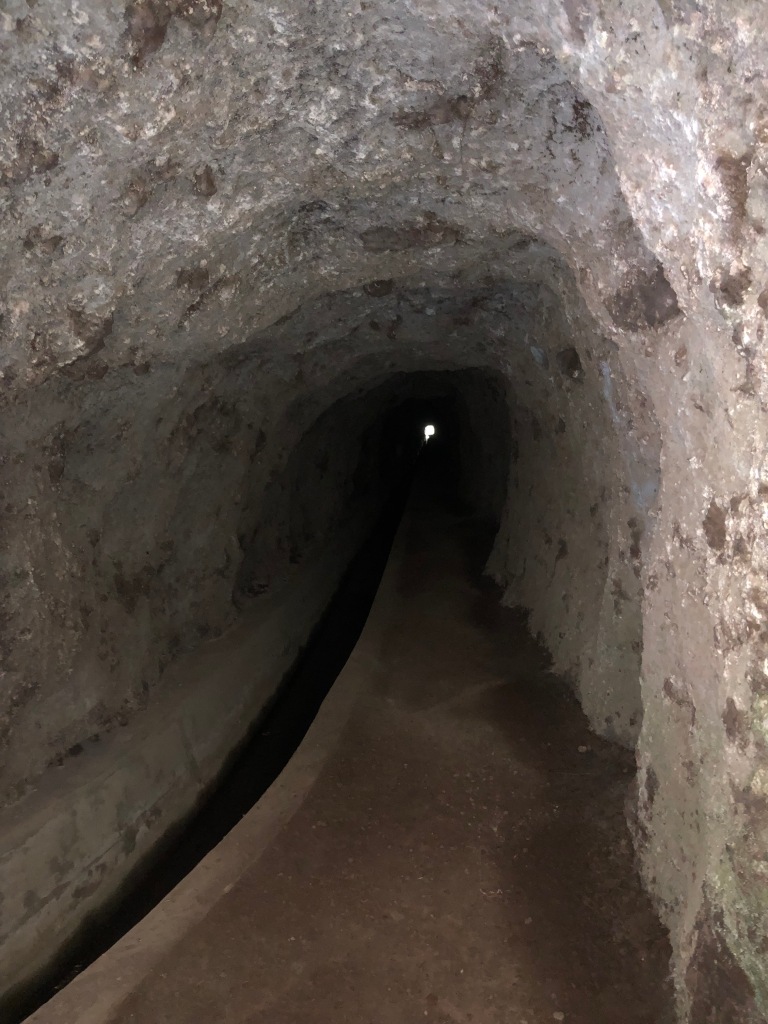 Reaching the tunnel, I balked. Then ensued a scene not dissimilar to many others we have navigated over the years together.

“No way am I doing this. Are they out of their freaking minds? It’s pitch black in there. Why didn’t they give us torches?”

“Don’t worry, your eyes will adjust.”

“Mine won’t. Wait, I’m going to use my phone flashlight.”

“But you can see light at the end.”

“All right, then, just let me step aside…” There was a splash and my scream echoed through the tunnel as I turned my phone light and saw him struggling to right himself from where he had fallen into the ditch.

“Oh, god, are you okay? You could have broken your ankle!”

“I’m fine. Don’t worry about me, just get moving.”

I walked as quickly as possible without running in the dark, as the speck of light at the end of the tunnel grew bigger.

We emerged on the other side to a gorgeous waterfall with another sheer drop. I collapsed on a rock. He looked at me and shook his head. 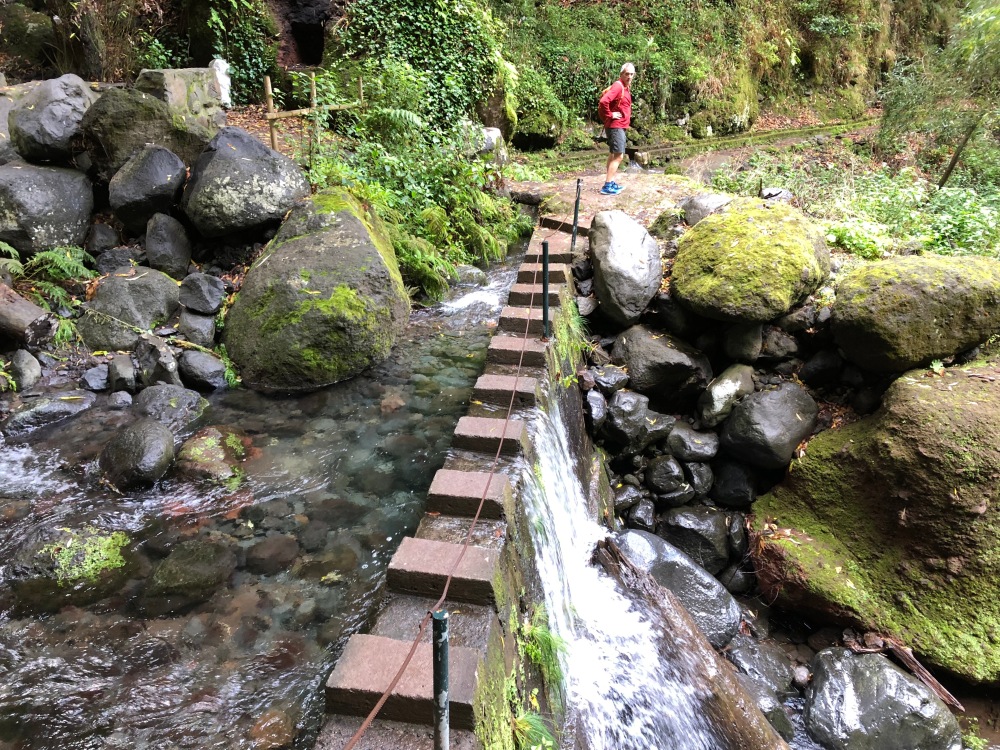 “You’re not your daughter’s father!”

I cracked up. “No, that would be biologically impossible.”

But he was right: I’m my mother’s daughter, not my father’s. My dad is the adventurous one, the guy who goes kite surfing at the age of 86. My late mother’s idea of sport went no further than the dance floor.

I inherited her fear of heights, of enclosed spaces, of flying, of fear itself. I also got her eyes, some of her kindness and a lot of her sensitive soul. Sadly I did not get her ability to cut a rug. From my dad I got a love of the outdoors and some of the exercise gene. Just not at altitude. 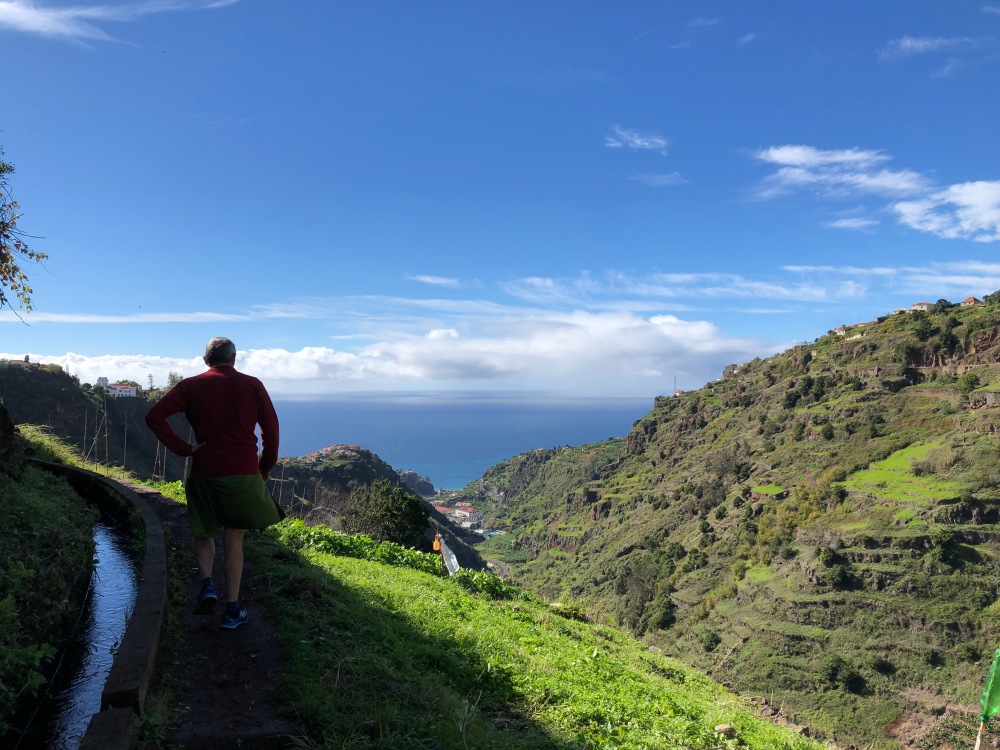 We continued on, through gorgeous vistas. Fifteen minutes past the tunnel, he couldn’t find his sunglasses.

“Where did you have them last?”

“Right. They probably fell off in the tunnel.”

“I’m going back for them. You wait here.”

I put my foot down. I may have even stamped it.

“No way! There is no guarantee you’ll even find them. And I’m not going to wait here for half an hour worrying while you go and look. We’ll buy new ones.”

He was not happy. I reminded him that if we had made it this far together it was because we both knew when to pick our battles and when to cut our losses. We moved on.

A short while later, the path disappeared. We stopped at a fence where it had been washed away. Some other hikers confirmed that the steps we had passed some ways back led down to a different levada, one that would lead us back to the hotel.

On reflection I suppose that marriage is like that trail. Sometimes it is dizzying, and sometimes there are dark passages where you can’t see the light. But you just keep walking, a step at a time, putting one foot in front of the other. You keep the faith. And suddenly you realize how far you have come. Que de chemin parcouru. 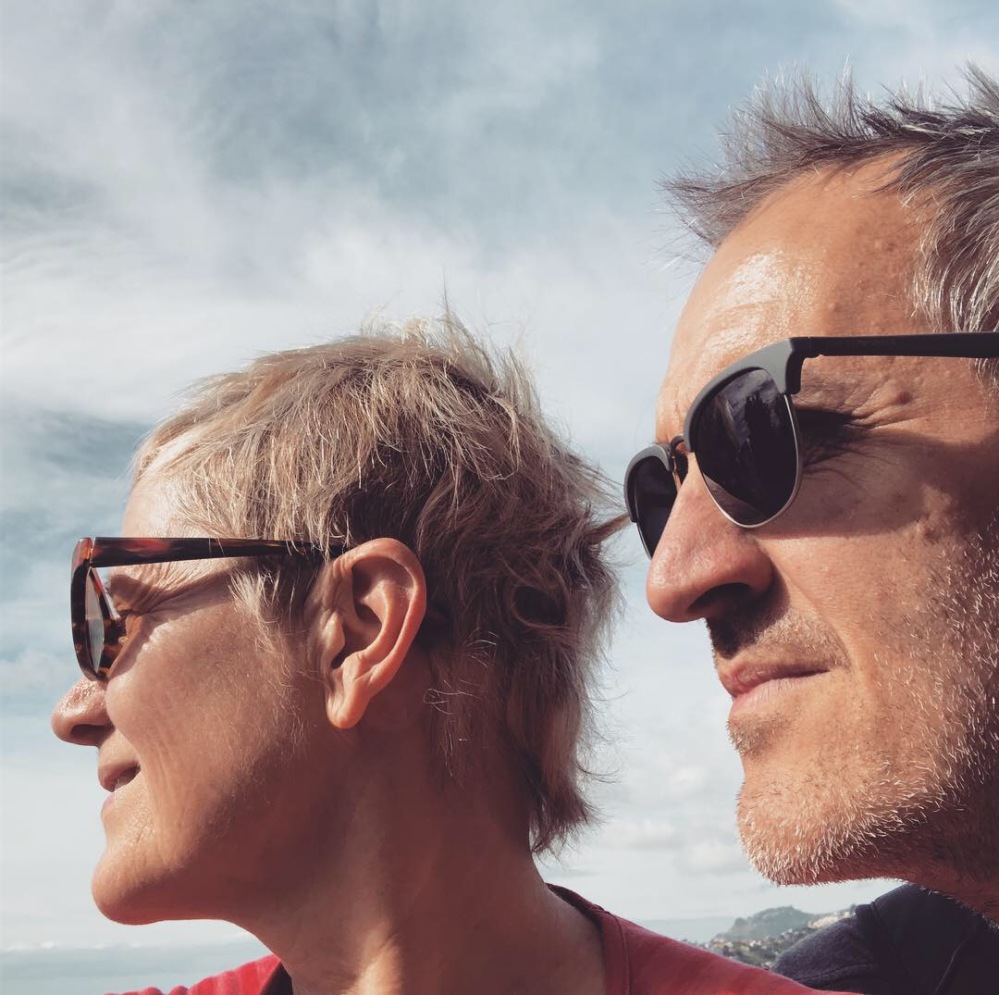 One of the last sightings of the sunglasses…