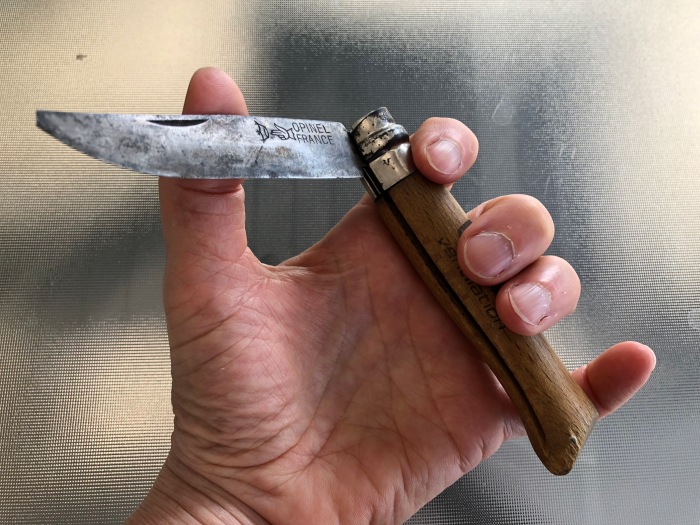 So thick you can cut it with a knife.

That expression, the French version of which is ‘à couper au couteau’, is often used to describe an accent. A heavy one. Like one in which a typical French politician, ie not a slick new model like Emmanuel Macron, attempts to speak English.

In French, however, it is also used to describe heavy fog, a wine or even an atmosphere. I learned this from Bob, that wonderful online reference for French as it is actually spoken (not for learners as it’s all in French).

And when it comes to cutting with that knife, if you are in France it has to be with an Opinel knife. The Savoie company started making its trusty folding knife with the wooden handle back in 1890 and has been famous for it since. So it is that the Swiss have their army knives and we have our Opinels. If you go on a picnic in France, that slab of sausage or cheese or baguette just has to be sliced with a trusty wooden-handled knife that someone happens to have in their pocket, hopefully one in better condition than ours!

As you can see from my feature photo, we are not good examples of French culture. Our Opinel was moldering in the back of a drawer and is in terrible shape. The tip of the blackened blade appears to have been broken off, possibly from being used as a screwdriver instead of a knife, and the handle bears the logo of another company, so it was probably a giveaway. In fact, it probably belongs to my Beau-père, handyman extraordinaire, so it has been around the block a few times.

Whose English, by the way, sounds a lot like Sarkozy’s. There is no political message in that; Hollande’s anglais was just as bad.

But like the knife itself, though it may be thick at times and dull at others, it is sincere. And it gets the job done.

Do you have an accent? Or a trusty knife?

34 thoughts on “A couper au couteau”