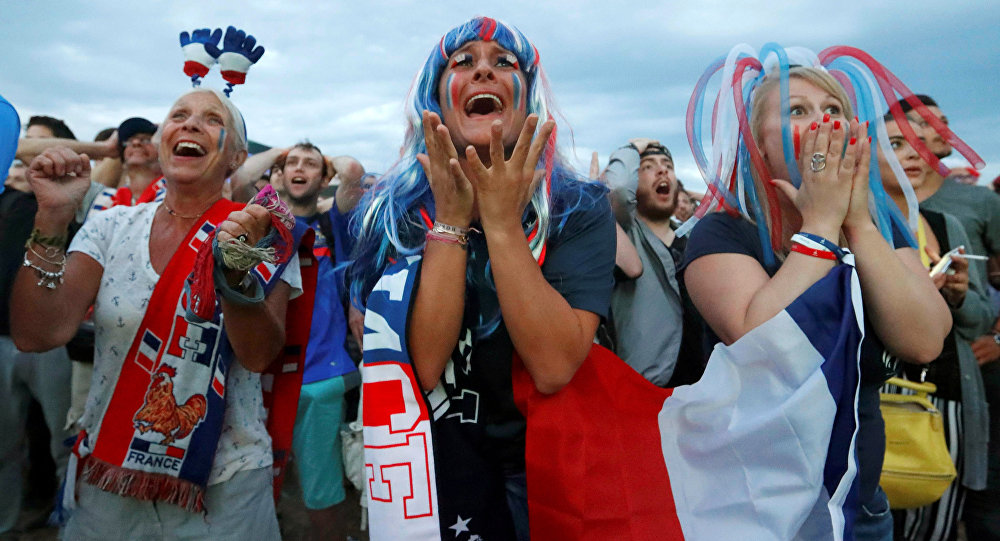 Let me begin by saying that I am no sports fan. This applies equally and unilaterally to all sports, with the exception of any that I happen to be doing. That means no Olympics, no Rolland Garros, no Tour de France, no golf, no baseball. Not even hockey, my home country’s national sport.

I am especially grateful for having married a man who is not particularly interested in watching televised sports. The sound of cheering fans on TV makes me vaguely nauseous. The inane banter of the sportscasters and their hysterical cries in anticipation of a goal make me crazy. If I had to listen to that every weekend we would probably not have made it out of the starting blocks.

There have been two notable exceptions to this policy. The first was in 1998, the other on Sunday. When I discovered a horrible truth about myself: it’s probably just as well that I’m not a regular sports fan. Because when I do root for a team, I become a nasty, screaming banshee with murder in my heart.

But French. Down to my deepest primal self.

In 1998, we had only recently moved outside of Lyon to the sleepy village of Soucieu-en-Jarrest. We barely knew our neighbours when word came that the final was going to be shown on a big screen at the football field just around the corner from our house. When it looked like things were going well for Les Bleus, we packed up the kids and joined every other inhabitant of our village out on the field at the stadium. Suddenly it seemed like we knew everybody. The mood was high and the draft beer flowed freely. When we won, there was a collective sense of joy that took over every last one of us. We were the Champions! And we joined arms and sang the theme song of our team along with everyone else: I will survive. It was epic.

So when it happened that we were in our old village on Sunday visiting friends, we were not-so-secretly hoping that we could stage a rematch performance on the football field. Alas, it was not to be. Times have changed, our friends explained, and it seemed the town could no longer organize such an event without proper security measures, bla bla bla.

That didn’t stop us from watching the game. And perhaps it’s just as well that no one but my closest family witnessed my performance. In between a spectacular flow of curses in both languages, I would have cheerfully ripped the pony tail off that Croatian player.

And then it happened. We are the champions again!

You can see the difference that 20 years has made to the celebrations in the video below from Le Monde. Due to the risks associated with terrorism and crowd control, the bus carrying Les Bleus along the Champs Elysées on Monday was segregated by police and a separate lane from the public. It zipped through in less than 20 minutes whereas in 1998, the players were surrounded by their fans and the whole procession lasted two hours.

Still, I think that all this sports fan malarkey isn’t really for me. Patriotism, nationalism, bigotry, competition against those who hail from other places. In the end, this kind of display represents everything I detest.

Not to forget the violence against women, out-of-control crowds looting stores and other drunken behaviour that often accompanies such events.

And yet. People need heroes. Kids need dreams. We all need a reason to cheer. The Elysée Palace invited kids from all walks of life to share in the VIP event. Sport can indeed be a great leveler. And so I will probably make an exception and wave the flag for France again.

Once every 20 years isn’t bad, right? And If France makes it to the World Cup Final in 2038, that should just about give me time to recover.

Are you a sports fan?