Spring has been taking its sweet time in making an appearance. Normally the signs are visible by mid-March but this year Easter came and went with nary a blossom. It’s not surprising that the longed-for season of renewal is dragging its feet – winter came in with a bang far later than usual. But this week, enfin! The unmistakable signs of le printemps are here at last.

The birds are the first ones to announce that something is up. Even before we sprang forward by an hour, I could hear them twittering away in the predawn dark. Now there is a flurry of activity going on in the eaves and in the branches at all hours.

Forsythia is the first floral sign of spring. Hello yellow! I love it for its brief, joyful burst that heralds so much to come. Its intense yellow hurrah will only last a few weeks at best. It’s joined by bright daffodils and a softer yellow wild flower that grows around the base of trees. Wish I knew its name.

Next: the rain. It has been pouring on and off for the past couple of weeks. We had an actual thunderstorm yesterday. I could feel winter’s cold breath blowing madly against the warmer spring air. It’s colder again this morning so winter may have won the battle but spring will win the war.

Around town, all the signs are there too: the year’s first ‘braderie’ or rummage sale is coming up this weekend and – joy! – the local restaurant by the lake is open again. It closes from October to March as it specializes in local lake fish. Can’t wait to have the season’s first plate of filets de perche, the tiny fish that are cooked ‘à la meunière’ and served simply with a butter and lemon sauce. 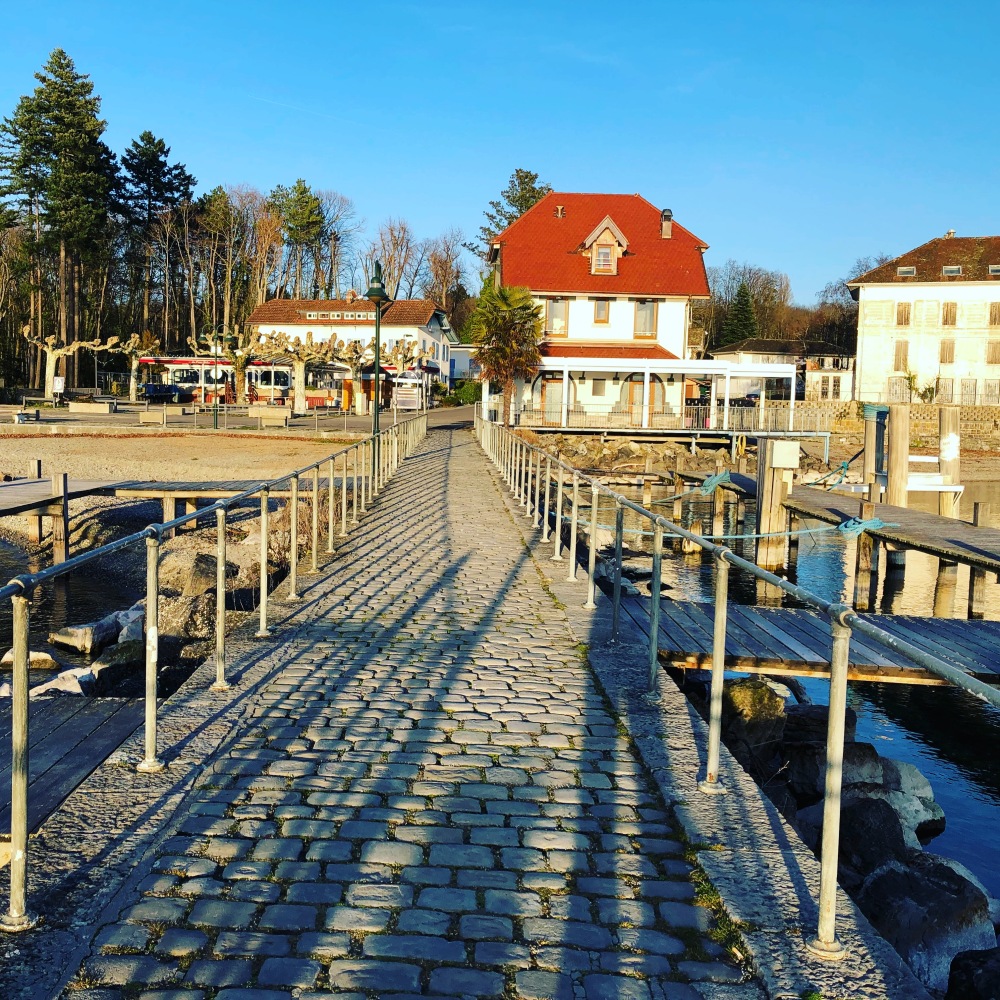 But first, there is the obligatory post-winter régime to rid ourselves of excess blubber. Signs have sprouted in the shops promoting ‘cure d’amincissement’, ‘détox’ and ‘minceur’. As for me, I find that it helps to eat less. So I’ve cut out my sweet and salty treats for now and am upping the ante with a bit more exercise.

Another sign of spring is the sudden onset of wardrobe renovation. I went down to the charity shop in the village and splurged on several second-hand finds. Someone who is just my size and has excellent taste must live around here. Then, given that I’d only spent a few euros, I splashed out on a brand new pair of summer sandals online. Oops. Can’t wait to take these babies for a trot.

Now the schoolkids are on holiday for another two weeks. Easter vacation is their last official break before the summer. There has been talk about reducing the (in my opinion, ridiculous) amount of vacation time between the Toussaint, Christmas, Winter and Spring breaks (each of which last two weeks). The mere mention of such a change in the sacrosanct French school calendar has various unions gearing up for action.

Speaking of which: across France, strike season is gaining momentum as the SNCF continues it movement, or lack of. More on that later.

Perfect weather for a paddle on an alpine lake. Although a bit of a breeze made it hard to get back. One of these days I’ll try learning a few fancy strokes instead of just worrying about staying upright! (And admiring the view…) #swissalps #sommer #sup
Sky TV. #soapopera #stormyweather
That’s my boy! Higgins says hi. #goodboy🐶 #frenchiesofinstagram
Another storm signs out. #skiesofswitzerland #aftertherain
What a party! The platinum jubilee concert is serving up an amazing mashup of 80s pop, new talent and superstars. Blown away by George Ezra, Alicia Keys, Duran Duran and Sam Ryder. #PartyatthePalace
Going up! #zürichhauptbahnhof #escalator #architecture