Le zouave is not happy. Not only are his feet getting wet, he’s up to his culotte in the Seine, whose levels have risen to dangerously high levels this week after torrential rains causing flooding in Paris and nearby communities.

‘Le zouave’ is the statue of a North African soldier, erected by Napoleon in 1856 in commemoration of the victory at the battle of the Alma in Crimea. It seems the zouave holds a special place in the hearts and minds of Parisians. Located at base of the Pont de l’Alma, this brave fellow acts as a warning: when water levels rise high enough that his feet get wet, it does not bode well.

The Alma bridge gets a lot of attention. It is near the famous tunnel where Princess Diana died in 1997. Here it is, along with some other famous Paris bridges, in drone images of the flooding.

And here’s a graphic that shows various dates and water levels of the zouave for the history buffs and technical types. (Of which I am neither. I like the story part. The rest flows in and out of my brain like the Seine.)

‘Crues’ means floods; ‘pics’ are peaks. Note that the bridge was reconstructed in 1974, placing the zouave 80 cm higher. 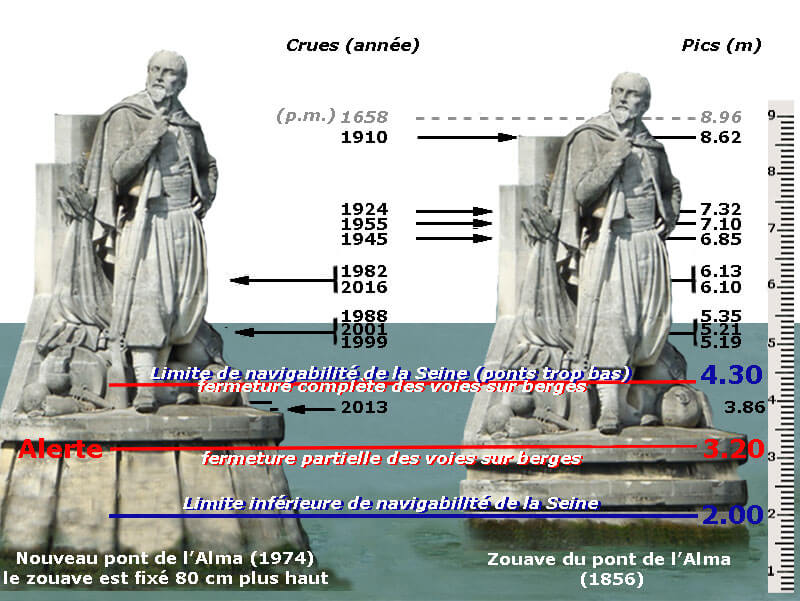 If all goes well, water levels should go start going down in a few days. Unless we get more rain, that is. And it’s pouring this morning.

Those who live in Villeneuve St. Georges and other suburbs near Paris have entire neighbourhoods underwater. Many have been evacuated and those who are sticking it out are braving it with no electricity.

It’s also a problem for les péniches, the iconic houseboats and restaurants along the Seine. I would have thought that during a flood a boat was the safest place to be but it seems that when the river is too high, they can break their moorings and end up crashing into a bridge. Like the Alma.