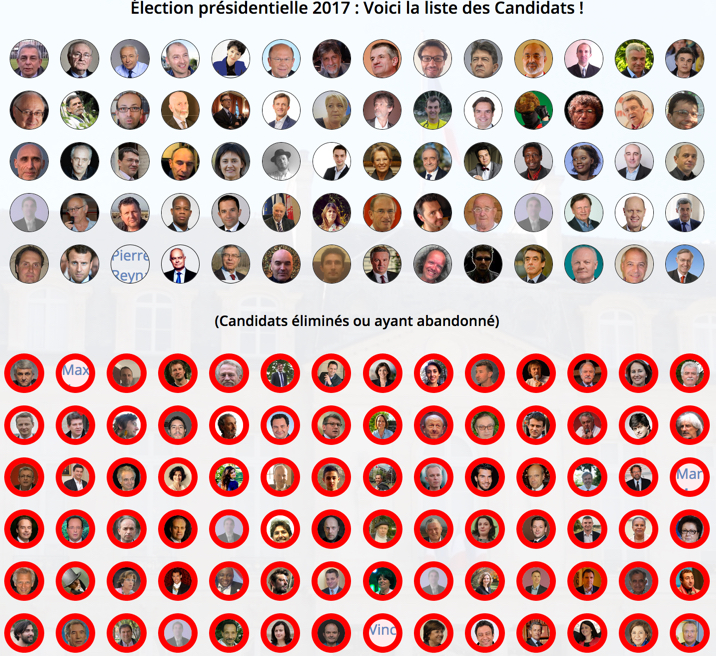 Is it so surprising that in the land of 400 cheeses there are almost as many candidates for Président de la République?

After 25 years in France, several of them with my voter’s card in my pocket and a certain fluency in its ways, only now am I beginning to understand (sort of) how this whole voting malarkey works.

It seems that anyone who is able to vote can also declare themselves a candidate in the 2017 French presidential election. And quite a few already have – upwards of 150 by my calculations.

Getting the requisite 500 signatures of elected representatives to make their candidacy official is much harder: so far only a handful have achieved this. And today, March 17th, is the final date – after which the list will be greatly reduced. St. Patrick may dance a little jig.

In the meantime, I have discovered that the list of candidates contains some real gems. There is Super Chataigne (eh oui, super chestnut), a masked contender whose platform is founded upon giving democracy back to the people. I think it is a parody but in France it is hard to be sure.

You have to wonder why they would bother. It’s fairly certain that the vote will come to down to one of a short list of Macron, Hamon, Fillon or Le Pen. But it seems to be dear to the French heart that the election keep its balance, ensuring that everyone, including the Trotskyists, has a voice in the debate. Peu importe – small matter – if they are eliminated before we get to the first round. At least a diversity of views will have been represented.

A degree of pluralité, or pluralism, will mean that the next month will be interesting, even entertaining. And I hope the result will be less catastrophic than other recent election results.

Stay tuned as the saga continues!

Layers of light and shadow. #magic #mistymorning
Fall forever. #seasonoflove
Been wearing the same French-made boots ever since I first fell in love with the brand many years ago. Just got a new pair and they fit like gloves. #arche #thesenbootsaremadeforwalking
Misty morgen. Woke up to this bit of autumn magic. #mistymorning
Nothing like a bath with the sun streaming in. #lebain #bathtime
Quelle belle journée! #september #loveswitzerland #lakelife