There is something special about being invited to attend a wedding in France. They even have a special locution for it. You don’t go to a wedding: On est ‘de’ mariage.

Many of our friends and family have been married for years so it had been a while since we last attended a wedding. I suppose it’s a measure of how long we’ve been in France that we are beginning to be invited to the next generation’s nuptials.

When our friends asked us if we would come to Normandy for their eldest daughter’s wedding, the answer was a resounding oui. It felt like an important milestone to share with people who were among our first friends when we arrived in Lyon. We had known Marion as a little girl and missed them since they moved to Rouen. Besides, it had been far too long since we had last visited the home town of my husband’s family who hail from neighbouring Evreux.

First there was the small matter of what to wear. We don’t often get dressed up these days and I found I had nothing suitable. Quel dommage! Off I went to Globus, my favourite Swiss department store, where I found something simple but elegant that didn’t break the bank. A rare find indeed.

ZFrenchman trotted out a rather nice suit that he hadn’t worn in years. We updated it with a new shirt and a pair of Italian leather shoes. It seems he is more adept at climbing mountains than wearing leather soles in the city. He slipped on the cobblestones and nearly broke his back going down a flight of steps to the parking lot. Thankfully only his pride was wounded. 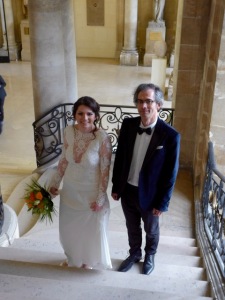 Marion and her proud Papa, Michel

As soon as I’d dried my tears of hilarity relief, off we went to the city hall. When you get married in France, whether or not you choose to have a church wedding, the real deal takes place at la Mairie. This is where you sign on the dotted line and are officially pronounced husband and wife.

Because it is France, you can generally count upon a certain amount of atmosphere. I don’t just mean a beautiful old building with period décor and sweeping steps, I am referring to the ‘animation’ that is to be found in most big cities and public places these days. Rouen was no exception: there was a boisterous demonstration in progress with clouds of smoke, loudspeakers blaring and banners waving. The city hall was encircled by police; security guards let the wedding guests in by the side door. 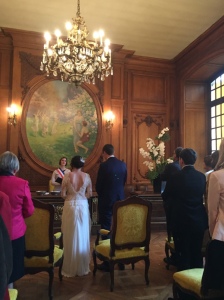 The ceremony itself was simple but sweet, with about seventy guests in attendance. The bride wore a beautifully designed dress with lace that showed off her back to perfection. I thought this was rather clever given the fact that it is your back that gets the most views on your wedding day.

Marion and Gauthier made a handsome couple. They are both doctors and so were many of the guests. It felt reassuring somehow to be surrounded by medical professionals in case we had another slip on the stairs.

There was a short break between the ceremony and the reception, then it was on to a restored grange – farm building – a short drive away in Le Neubourg. They had decorated it beautifully with table arrangements that represented endangered wildlife from around the world.

Les dragées – sugar-coated almonds – were at each place setting. These little works of edible art are de rigueur at French weddings. I did not know why but Google led me to this interesting explanation and a bit of fascinating history about les dragées. 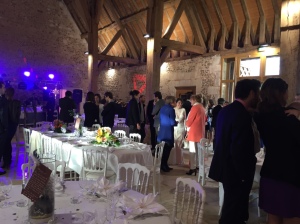 We had champagne cocktails followed by Lebanese food – rather unusual for a wedding in France but fully in keeping with our friends who have never done things by the book. Which is probably why we are friends!

After dessert – a fabulous multi-tiered wedding cake iced in traditional pâte d’amande – it was dancing and sipping until the wee hours. We, being older if not wiser, slipped away before they became too wee. We even made it around the dance floor without tripping!

And les jeunes mariés? They are off for a honeymoon trip to Sri Lanka. We wish them longue vie!

Have you been to a wedding lately? Tell me about it!