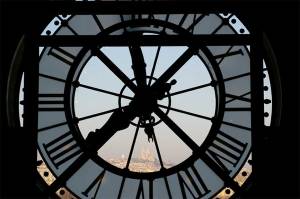 While most people think of the Louvre as the must-see museum in Paris, for me it’s the Musée d’Orsay.

When we lived in Paris, the Musée d’Orsay was still under construction, being transformed from its former life as a turn-of-the-century railway station into a magnificent art museum. It finally opened just as we left, and since then we had never managed to return for a proper visit. We decided to put that right this time around.

The Orsay museum hosts a vast collection of paintings from 1848 to 1914. I had previously seen some of them in their former home at the Jeu de Paume museum, now dedicated to modern photography. I have a penchant for realism and who doesn’t love the Impressionists? 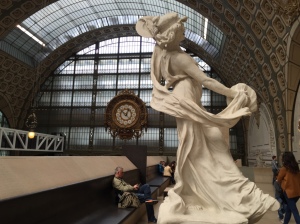 But first: the building. To me, it is worth a visit just to see the clocks. The ornate gold clock inside the main hall and the amazing view from behind the big exterior clock through to Sacré Coeur atop Montmartre.

We signed up for a guided tour. I find that having a real, live guide who is able to bring the art works to life with stories makes all the difference. Our French guide was full of anecdotes and amusing details about the artworks and their masters. 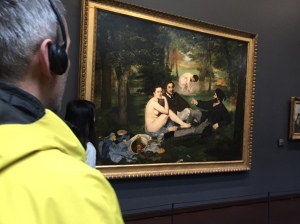 Our guide told us the story of how the painting had been initially rejected for exhibition, not so much for the nudity but for the way it was portrayed, the woman so shockingly naked amongst well-dressed men, implying that she was a prostitute. He added something about how this would never have been accepted in America, given that country’s notorious prudishness. We all nodded, except for one woman, who seemed surprised. He explained that les Américains were not too keen on portrayals of love – l’amour.

That was just wrong. Not love, I interrupted. Sex. L’érotisme. He acknowledged my point, a bit sheepish. He hadn’t wanted to use the word, he explained, given the presence of children. I thought that was rather odd: so now who was being the prude?

I could have spent the entire day just wandering around, and if I lived in Paris I would surely get an abonnement, or membership, so as to be able to come and be with these works on a regular basis.

Or perhaps just to sit in one of these amazing chairs. 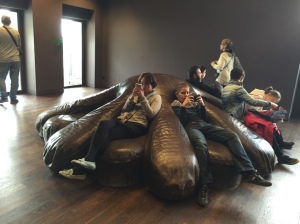