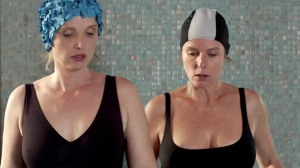 I can see myself in the not-too-distant future, reminiscing to the youngsters about the old days. How exciting it was, I will tell them, pretending not to notice as their eyes glaze over, to go and see the latest picture on the big screen, in technicolor no less! I will explain about the projectionist in his booth, the hot anticipation in the hushed movie theatre as we crinkled candy wrappers and munched popcorn. No doubt it will be as meaningful to them as looking up information in the library or making a call from a phone booth.

Perhaps they’ll pay attention when I tell them about the first time I went to see a movie in Paris. About how the screen was so small, the tickets so expensive and they had no popcorn but ice cream. Before the film started we checked under the seats for bombs.

In France, of course, we don’t have movies, we have cinéma. I am no fan of the French film; life is too short to be taken that seriously. I do enjoy a certain genre of popular comedy that the French do very well. The one that has inspired this post is the latest release from the French actress and cinematographer I admire most: Julie Delpy.

Delpy’s combination of acerbic wit and character-driven comedy drama is just my cup of cappuccino. She is best known for the trilogy of films directed by Richard Linklater – Before Sunrise, Before Sunset and Before Midnight – in which she co-starred with Ethan Hawke, as well as 2 Days in Paris and 2 Days in New York. Delpy is often compared to Woody Allen. Her writing and direction is as good but her characters less annoyingly neurotic.

I love how she navigates so naturally in that space between romanticized ideals and real life. She is a queen of the fast-paced repartée. Her ability to do this equally well in English and French has my total admiration.

‘Lolo’ is her latest film and first attempt to seduce a mainstream French audience. It is about a single mother’s attempt to find romance against the odds of her sociopath adult son. The reviews have been mixed but given the bande d’annonce (trailer in English), I will be making the effort to go out and see it at the movie theatre. One day soon I’ll tell my grandchildren all about it.

Do you still go to the cinema? What’s your fondest memory of the movies?