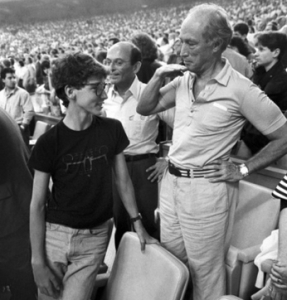 My earliest memory of Pierre Elliott Trudeau goes back to 1967, the year before he became prime minister.

I was ten years old that year, and Canada was celebrating its first 100 years as a country. We were a young country, everyone said, although it didn’t feel that way to me. We celebrated Canada’s centenary and being 20 million with songs and parties and a nascent sense of nationalism. Change was in the air. The Beatles were on the radio and my mother sat glued to our black-and-white TV, just as she did whenever anything big happened in those years: when President Kennedy was shot, when the first man walked on the moon, or when the race riots exploded south of the border.

Trudeau came on the scene as Canada was grappling with issues of identity: who were we, anyway? Were we English, were we French, were we British or American? Perhaps we were a bit of all those things, but somehow when Trudeau became our prime minister, we figured it out. We were the truth north, strong and free! We had our own flag and we learned how to wave it.

And we had a young, attractive PM representing us abroad. He was a bilingual French Canadian, and an intellectual. He was born in Montreal but he had all the glamour of the French. He was also a bachelor, and a bit of a ladies’ man. The women, including my mother, all swooned. Trudeaumania was born. My father scoffed, until someone told him he looked like Trudeau.

Trudeau reportedly had affairs with many famous women, including a personal idol of mine, Barbra Streisand. Then he married a woman thirty years his junior, a flower child called Margaret. Canada was shocked, Canada was thrilled. The couple produced three children while Pierre was in office. Sadly, the marriage did not last and Margaret went off the rails before remarrying and disappearing from public view. She was famously photographed dancing in Studio 54 when the Liberal party lost in 1979.

In his years in office, Trudeau stitched together the fabric of our bilingual and multicultural identity. He managed to calm the Québec sovereignty movement, although he did not make friends there, and made us proud with his stand on international issues.

Like most of my fellow countrymen, I am happy to see the last of Harper. He was boring, polite and oh-so Canadian. I could never remember his name. Outside of Canada, there was no reason to know it.

We Canadians are not the proud, flag-waving types; ours is not a celebrity culture like our American cousins to the south. To some extent, Pierre Trudeau changed that. Now, Justin is set to continue what his father started.

So forgive me for waving the flag for a moment: Long live Trudeaumania!

What are your memories of the Trudeau years? Any thoughts on Canada’s new PM?