In honour of La Fête Nationale, here is an encore of my post about the Gallic rooster and the 10 things I love most about the French. 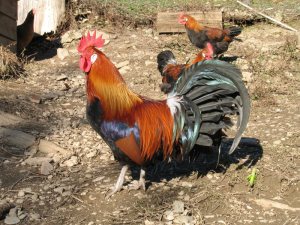 If you spend any time in France you will hear the story of  le coq Gaulois – the Gallic rooster – and why it is the unofficial symbol and mascot of France.

“Do you know why the rooster is the true symbol of the French people?” asked my father-in-law not long after I arrived in this country. He had a telltale twinkle in his eye, so I hazarded a guess. “Because he’s cocky?” He chuckled and delivered the punchline. “Parce que c’est le seul capable de chanter les deux pieds dans la merde.”

Translation: Because he’s the only one who sings while standing in shit.

Everybody laughed but I confess I didn’t really get it. Until it dawned on me: the French are often dans la merde but that doesn’t stop them from crowing.

It was my first experience of self-deprecating humour à la française. Or, as they say…