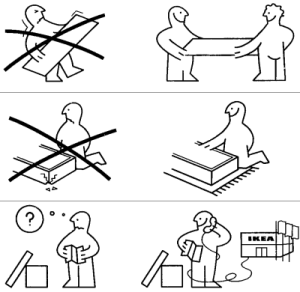 I used to read a column in the newspaper called “Can this marriage be saved?” Both halves of a troubled couple would tell their side of the story, then the marriage counsellor would pronounce an opinion as to whether or not the relationship could survive, and what needed to be done. It was pop psychology at its poppest. Needless to say, I ate it up.

I have never felt the need for this kind of advice. I know my marriage can survive. I know it because we have survived the true test, the only one that matters. My husband and I have survived – you guessed it: Ikea.

Labor and childbirth, bringing up two kids, multiple cats and dogs, an international move, teaching me to drive a standard – all of this pales in comparison to the stress of the ultimate relationship test: Shopping for, loading and assembling furniture from the retailer whose ad campaign – ‘Swedish for common sense’ – I long ago transformed into: ‘Swedish for I’ll kill you.’

Not only have we survived Ikea, we have done it on two continents and in two different languages. No, make that three – we’ve also shopped Ikea in the German-speaking part of Switzerland.

In our early days, we went there because we had no money. We urgently needed a fold-out bed that was cheap without breaking his mother’s back – Ikea was there. Then we needed a Billy bookcase because, well, we’re both readers – there were books. Whenever in the store we discovered we needed a whole bunch of bizarrely named items. Ektorp. Kvarnvik. Tidafors.

Then we needed a crib. Heavily pregnant, we schlepped through Ikea in Toronto. Biblical thoughts ran through my head: “She grew hungry in Kitchens, broke waters in Bathrooms, lay down in Bedrooms.”

Our different navigating styles became evident as I instinctively sought the shortcuts (long before they became official, going against the flow of packed humanity). He followed the official routes while moaning and complaining about the whole thing. Ikea for me was a challenge, for him it was plain old suffering.

Our different approaches became even more apparent when it came to loading the car. I wanted to strategize the trunk and figure out a plan, but before I could even think he had shoved it all in (what can I say, it’s a male thing!).

And our differences came to a head when it was time to assemble the f**ing things. While I methodically sorted the various parts, he had the main frame assembled and had thrown out boxes and instructions. Inevitably, there were tensions. We would be missing a screw (I always knew this to be true about myself) or some other essential widget. He would become furious about Ikea and its crap quality, swearing never to return. I would go back by myself the next day, swearing never to allow him access to a screwdriver again.

The crib got assembled. I did not give birth in Bedrooms. Miraculously, our furniture stood straight. Some of it has lasted as long as our marriage.

I have learned how to make the most of our differences. I let him do the heavy work while I hide the instructions and save them in a file. I shop by myself and just ask for his help in unloading the car. Solo, in my Micra, 5’2’’ of determination, I have managed to transport entire wardrobes. Where there’s a will, there’s a woman.

In the latest chapter of my love-hate Ikea relationship, the dog left his mark upon a footstool where the cat was lording it up. I felt love for the Swedes when I saw that the cover was removable and washable. Then I saw how (insert that word again) hard it was to remove the thing, ripping my cuticles in the process. Mostly husband is way more patient than me. And he has stronger hands. So when I washed the cover of the *unpronounceable name* he promised to put it back on for me when it was dry, then promptly forgot and left for the week. I waited three days and then decided to do it myself (did I mention patience is not my virtue?)

If he could do it, I could do it. First, I put on one corner. This did not work, as it would not stretch to fit the other corners. I tugged and I pulled and it started to rip. I cursed and I swore and examined my bloodied cuticles.

I reasoned the technique was just to get it over the entire frame more or less straight, then fix the seams. I did this, congratulating myself on the triumph of rational thinking. Then I tried to fix the velcro. It was upside down. I cursed and swore a bit more. Arv! Flört! Kortvarig!

Sometimes people ask: after so many years in France, which language do you curse in? Both, of course. And occasionally, in Ikea.

What’s your most memorable Ikea moment?