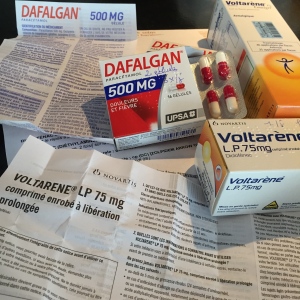 A doctor’s prescription is known in France as une ordonnance médicale. The name says a lot about how the French view their prescriptions. Surely if a doctor orders you to take something, take it you must?

My late Belle-mère was a regular at the doctor’s office and could never recover from even a minor head cold without a prescription. Like many French people she did not believe in generic medicines – she considered them cheap imitations and insisted the doctor prescribe the original brand. I tried to convince her they were exactly the same molecule but she turned a deaf ear to my science-based arguments. 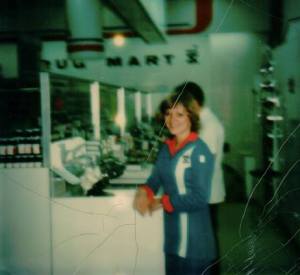 Me in my Shoppers’ Drug Mart uniform

I used to be a pharmacist’s assistant at a drug store in Canada many years ago, a part-time job that paid for my education while also providing one of its own. I learned that people need to be given clear directions for taking their medication. That certain drugs were best taken with food or on an empty stomach, and that finishing a complete course of antibiotics was essential in order for them to be effective.

I also learned how NOT to pronounce the name ‘Cockburn’ when calling out one man’s prescription over the PA system.

When filling a prescription in North America, the pharmacist takes a massive jar of pills and counts out the prescribed number into a smaller vial, then sticks on a custom label with the patient’s name, the name of the drug, when and how to take it. This system allows the patient to receive the exact number of pills needed and to see at a glance how to take them. You could argue that it leaves room for human error, mislabeling, etc. But no prescription medicine ever left the store without a pharmacist personally checking it against the doctor’s prescription. Always assuming we could decipher the handwriting…we also made a lot of calls to doctors’ offices to double check.

Nothing so simple in France. Tablets come in a prepackaged box of blister packs along with la notice or patient package insert. This document is in accordance with strict regulatory rules that require the drug maker to disclose a lot of information, even for relatively innocuous over-the-counter drugs.

In order to find out how to take your medicine, you have to remove the insert, unfold it, and read through chapter and verse until you get to the relevant section. How much to take (posologie) and how and when to take it (comment prendre ce médicament?)

Your French had better be pretty good in order to glean the information you need from the language contained on the insert, which includes specifics for children of all ages, pregnant and nursing mothers and people with all kinds of pre-existing medical conditions. You also need good eyes or strong glasses to read the tiny print.

One thing that always mystified me was the French obsession with suppositories. I thought this mode of administration had gone out with hot water bottles but they are quite popular for certain ailments, especially for children. I remember having to give my kids suppositories for ear infections. Which not only seems bizarre but is a pretty hard sell for your child once they get old enough to argue.

The French love their system and will hear no criticism of it. They argue that factory-sealed blister-packs of pills are safer and more hygienic, and the details contained on the insert are helpful in case of any potential side effects.

But too much information can be a dangerous thing. Super paranoid patient, I read the whole insert in detail before taking the first pill or administering it to my children. After considering the pros and cons of the treatments vs. serious adverse events like renal failure, allergic reactions or plain old constipation, I ask myself if it’s really worth it just to avoid a little pain? Half the time I don’t end up filling the prescription, or when I do it sits unopened in its package. And most of the time (knock, knock, knock on wood), I am just fine.

Famous last (first) words: Never begin a post like I did last week: “I am blessed with good health….” It is only asking for trouble. Tuesday morning found me doubled over in pain as I slipped a disc just after saying ‘Namaste’ at the end of yoga class. How’s that for irony, peeps?

Been wearing the same French-made boots ever since I first fell in love with the brand many years ago. Just got a new pair and they fit like gloves. #arche #thesenbootsaremadeforwalking
Misty morgen. Woke up to this bit of autumn magic. #mistymorning
Nothing like a bath with the sun streaming in. #lebain #bathtime
Quelle belle journée! #september #loveswitzerland #lakelife
Seagulls soaring around. Not sure why: swarms of gnats? A magnificent September day! #schwyz #swissalps🇨🇭 #september
Sunrise, sunset. #ticinomoments #loveswitzerland #sunrise #sunset