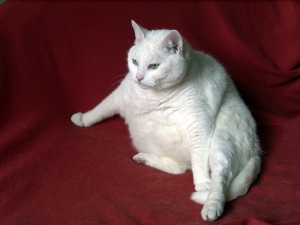 It’s not pretty. In fact, it may be the least desirable word in the French language. Even less attractive than ‘moche’ and that’s ugly.

‘Grossir’. Oh, the indignity of it! To gain weight, aka ‘grossir’ or ‘prendre du poids’ is the obsession (‘la hantise’) of French women and many French men. Being able to zip up those slim jeans is what keeps the majority of the population in this country on the straight and narrow, at least between vacations and end-of-year fêtes.

The adjective for big, ‘gros’ (or grosse in the feminine form), shares the same roots as that for the vulgar and unrefined. Foul language is called ‘grossier’. I suppose that’s where we get the word ‘gross’ in English – and also the slang expression to ‘gross out’ or disgust someone.

The only acceptable reason to grossir in France is to become gross with child. La grossesse transforms the word into something elegant, even beautiful. But even then it’s something that must be strictly managed.

My babies were both big, and so was my weight gain. I remember one woman asking me, “And your doctor allows you to put on that much weight?” I was stymied by the question. What on earth had my doctor got to do with it? I just ate healthily and figured nature would take its course. But the other expectant mamans worried about their weight gain, wanting to avoid a longer or more difficult delivery at all costs.

I used to be called petite. Mostly because I’m on the short side (5’2”). But even before middle age spread caught up with me, I never fit into French clothing. My body type is all wrong – too big of bone and heavy of limb. Even French shoes don’t fit. German, Swiss, Italian…but not French.

Everything here is on a smaller scale. People and parking spots. There are no supersize menus, no jumbo snack packs and few plus-size shops. The fact is, there is no culture in this country for big.

That is not to say that French woman don’t get fat. Bien sûr qui si! You can’t live in a country filled with gourmet foods and little fitness culture and never gain weight. That’s a myth that’s sold a lot of books.

As much as they love the good things in life, the French care deeply about appearances: elegance, refinement and la ligne. That sells a lot of diet pills, miracle cures and crazy weight loss schemes. None of which works, at least for long.

My late Belle-mère spent much of her life trying to stay slim. She tried everything: pills, Weight Watchers (which she pronounced ‘what-ay-wha-chairs’), even joining a gym. Her diets and exercise regimens worked for awhile but she inevitably yo-yoed back to being a little rounder than she was comfortable with. I only wish she could have found a happy place with her weight. A balance where she enjoyed life, remained active and most importantly, felt good about herself.

French woman do get fat. But they fight it. Mostly they do this by balancing out the weekend’s excesses with a slimmer regime during the week. By avoiding dessert, not snacking, staying active (although not necessarily exercising per se). It’s really about balance and moderation. And a refusal to let bulge creep in.

This summer the good life got the better of me. Not by much. But on my so-called petite frame, a few pounds makes a huge difference. For me, it’s not so much how I look as how I feel, which is gross in every sense of the word. So I’m stepping up the exercise and cutting back on the treats. At least until I feel good about myself again.

Nothing drastic, mind you. Life is too short not to enjoy a daily glass of wine or a slice of cheese, preferably both.

Et vous? How do you feel about your weight or attitudes towards weight in general?

Been wearing the same French-made boots ever since I first fell in love with the brand many years ago. Just got a new pair and they fit like gloves. #arche #thesenbootsaremadeforwalking
Misty morgen. Woke up to this bit of autumn magic. #mistymorning
Nothing like a bath with the sun streaming in. #lebain #bathtime
Quelle belle journée! #september #loveswitzerland #lakelife
Seagulls soaring around. Not sure why: swarms of gnats? A magnificent September day! #schwyz #swissalps🇨🇭 #september
Sunrise, sunset. #ticinomoments #loveswitzerland #sunrise #sunset