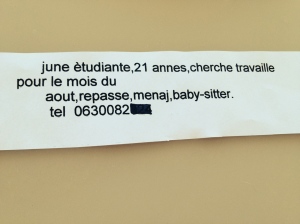 This note turned up in our mailbox last week, along with the usual jumble of ads from takeaways and real estate agents. (The latter despite the ‘pas de publicité’ injunction displayed loud and clear above our names.)

I was horrified. Not just by the lack of spelling and grammar but by the fact that someone might think that this is the way to find a job.

What does it say about the candidate?

Those are the facts. But to me it also says that this young woman has no sense of presentation, and presumably doesn’t care about detail. Not exactly the ideal candidate, even for house cleaning.

The ad reminded me of the importance of presenting oneself professionally at all times, no matter what your level on the job ladder. It also spoke to how very French I’ve become in my attitudes towards language. To be able to express oneself correctly in simple written French seems to me the absolute minimum prerequisite for a job in this country.

My French wasn’t that great, either, when I first put together my résumé and started knocking on doors. All the more reason to make sure my CV contained no spelling or grammar mistakes. Okay, I had a little help from husband. But these days, anyone with access to a computer can use spell check.

There is a proverb in French that says: “Les paroles s’envolent, les écrits restent.” Meaning that while the spoken word vanishes into thin air, anything you put in writing has a way of sticking around. It’s one thing to make mistakes when you speak French – that’s understandable for any non-native. A mistake in writing is far more shocking.

There’s also an expression to describe someone who speaks or writes in pidgin English. It’s called petit nègre, and it’s also a kind of creole from the French colonies.

Here is a corrected version of the ad text. Compare the original and see how many mistakes you can find:

How about you? Would you hire this person? Do spelling mistakes and typos matter to you? Or is literacy over-rated?

From near or far. This view never gets old. #swisslife🇨🇭 #loveswitzerland
What’s not to love? #loveswitzerland #selfie
Where did my view go? #comebackspring
What the what? #unsprung #winterbegone #schnee
Excitement just off our balcony this morning. Now we know what to expect in case of an emergency! #helicopter #schwyz #emergencymedicine
Look what I found on a wall by the train station in Zug. #graffiti #weathered #colors #tags