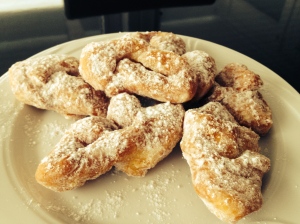 In which the writer rails against the unfairness of living in a country where one fattening fête follows another.

No sooner have we reached the end of January in France, with its endless toasts to the new year, its galettes des rois dripping with frangipane, than a new period of excess and indulgence presents its contingent of calorie-laden treats.

It’s all very well for the pious among us: they’ll be cutting back during Lent. But for us non-believers, it’s just another excuse to eat more sugar and fat.

The high-carb period of crêpes, gaufres (waffles), bugnes and other fattening treats begins on February 2nd, with la chandeleur (Candelmas) and continues with Mardi Gras, aka Carnaval. Literally: Fat Tuesday.

If that weren’t sufficient dietary suicide, it coincides with winter break, when most of France heads for the ski slopes to indulge in cheesy dishes like fondue, raclette, tartiflette. All washed down with a few glasses of your favorite white or red.

Mardi Gras marks a critical point in the calendar for my new year’s resolutions. If I reach the end of February without getting on some kind of track – treadmill or otherwise – along with curtailed drinking, healthier eating, exercising and sticking to a discliplined work routine, it’s just one downhill slide until the end of the year.

It’s a fairly small window, and I resent the fact that yet another fête manages to compromise my willpower.

But compromise it does. When we moved to Lyon some years ago, I discovered not just beignets – the French grandaddy of the donut – but bugnes, a lighter, crispier version dusted with icing sugar.

Mardi Gras is as much about extravagance and letting go as it is about food. The first time I experienced this was when my kids were in primary school in Lyon. It was a strict and sedate environment in which even the youngest children filed out the doors obediently at the end of the day.

Until Carnaval. Now that was a party. I barely recognized the schoolyard – a colorful, noisy confusion of costumed kids and red-faced adults.  Even the normally uptight headmistress was throwing confetti and looked like she was a few bugnes to the wind.

Pancake Tuesday was what we always called this holiday when I was growing up. I loved it for the fact it was the one day of the year that we could have pancakes for dinner. None of your thin, rubbery crêpes: we Canadians are raised on big, thick, fluffy pancakes, preferably with a nice knob of butter and a good dousing of maple syrup. Oh, and a side of bacon!

But it kicked off Lent, that loathed time of repentance during which we were expected to voluntarily give up something we loved. No amount of Easter chocolate could compensate.

The thing is, I hate giving things up. I’d much rather do penance by adding things in. The idea of self-sacrifice and denial invoke outrage and a sense of injustice in me. So I add on rather than subtract.

The problem in France is that there is a seemingly unlimited number of ways in which to add on, and very few in which to subtract.

So I’ll walk an extra half-hour rather than taking the tram. Pump up my level on the elliptical. Anything rather than refuse to indulge in something wonderful and delicious and fun.

By the way, if you’re interested, here’s the recipe.