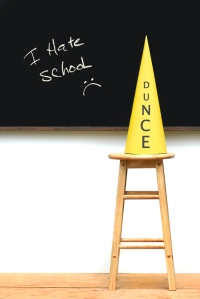 “You can always teach English.” That recurring refrain was my fallback position when I moved to France. As it happened, it proved both the truth and the lie in the expression, “Those who can, do. Those who can’t, teach.”

Teaching English got me into the working world in my adopted country. It got me healthcare benefits and helped pay the bills for a couple of years. Compared to the salary I’d been making as a copywriter in a Toronto ad agency, it paid peanuts. But I was grateful for the job.

But here’s the thing: I can’t teach.

I’m pretty good at doing one or two things myself. But I’m fairly useless at teaching others how to do them. I’m not very comfortable disserting to a group (although put me at a dinner table and give me a glass of wine, and I’ll dissert until dessert).

It turns out you don’t need any special skills to teach English as a second language in France. The woman who took my application at the language school in Paris told me the only requirement was to have English as your mother tongue. And it helped to be familiar with the corporate world as many of the students were senior executives.

I felt perfectly comfortable dealing with business people but expressed some doubt about the actual teaching. “I’m not sure I remember all that much of my English grammar,” I confessed. The lady was reassuring: “You don’t need it. We will give you the methodology. You will teach according to our manual. All of the pedagogic skills and tools will be provided.”

The French, I learned, use words like pedagogy and methodology a lot. They like to make things sound as technical as possible.

So I signed up to become a teacher at Berlitz. The teacher training program took place over a few days in La Défense, the slick business sector of Paris. We were a mixed bag of English speakers – several Brits, a couple of Aussies, one or two Americans and moi, the token Canuck.

As a Canadian it turned out that I was a particularly attractive commodity: they could sell me to teach either British or American English. “We prefer English, of course, but American is greatly in demand in the business world,” explained the responsable pédagogique (head teacher), with some distaste. The way he said ‘American’ made it sound like a completely different language. This was my first encounter with the hierarchy of the English language: Brittania rules in academia but the business world reports to the US.

The first thing they taught us was the golden rule of the Berlitz method of language training: we must never speak French to our students – they must be forced into speaking English. This would take some doing with the French, who wanted to learn English without having to actually speak it.

This is where the method came in.

The head teacher, a dapper Roddy McDowell-type, stood in front of the class and gave us a live demonstration. He slipped his hand inside his jacket and pulled out a pen.

“I am holding a pen. What am I holding?”  He nodded in my direction.

“A pen?” I answered, feeling silly. He shook his head and repeated the question.

“You are holding a pen.” The answer came from one of the Brits, who was clearly way ahead in his pedagogy.

“That’s correct. I am holding a pen. Now, you have all the skills you need to teach English according to the Berlitz method.”

As teaching methods go, it was mind-numbing but effective. By the end of the day, I would be so brainwashed by the method that I couldn’t stop speaking that way. My husband would ask what was for dinner, and I would say, “What are we having for dinner? We are having chicken for dinner.”

The idea was that the students would quickly get a working grasp of the language. The finer points of grammar and vocabulary would come, if not by osmosis, through practice. But you have to factor in for the French resistance.

The French believe themselves to be very poor at foreign languages. Although most high school students study Hamlet, few can actually put a sentence together in la langue de Shakespeare. English is taught by native French-speakers and French is the language of instruction. Teachers are state employees who must be French nationals. Few have actually lived outside of France.

All of which means that students are used to having everything explained in French. If they get the slightest inkling that you speak their language, they will persist in asking you questions in French. Which defeats the purpose.

During the time I taught English, I learned a lot about the French. I would use the method during the 40-minute lessons as fact-finding missions to discover as much as I could about their culture, what they did for a living, what they ate for dinner, where they did their shopping or traveled on vacation. It was my own French immersion training.

I also learned that I truly had no aptitude for teaching. When you’re not good at something, it’s hard to enjoy doing it — even harder to excel. And I was humbled to observe that many of my fellow teachers really could teach.

Thankfully, teaching English was only a transition for me. Eventually I worked my way back into doing what I do best, first as a translator, then in PR communications.