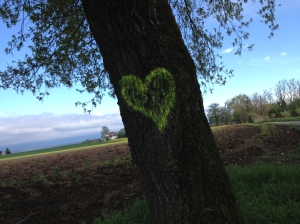 Spring has finally sprung in our corner of France. This year, the old saying about April has proven to be truer than ever. With the exception of a few nice days, the month has been cold and rainy. Now things are looking brighter with the prospect of warmer weather and a series of long weekends in May.

One of the most oft-repeated examples of French folk wisdom expressed in les dictons is that about the unreliable spring weather:

Translation? “En avril, ne te découvre pas d’un fil.” Literally: “In April, don’t uncover yourself by a thread.”  Thanks to Ella Fitzgerald, we North Americans have images of Paris in the spring as being romantic and filled with chestnuts in blossom. However, that does not translate to sunny or warm.

The second half of this expression is the fun part: “En mai, fais ce qui te plaît,” meaning “in May, do as you please.” The saying comes from the more clement temperatures, meaning you can safely unwrap the woolens. But another way of interpreting this could be: in May, go out and play!

Whoever planned the public holiday schedule in France was either trying for revenge on the cloudy April skies or simply oblivious to the fact that packing so many long weekends into one month would not be particularly good for the economy.

This year, the month of May kicks off with La Fête du Travail (Labour Day) on the 1st, followed by Armistice Day on the 8th, then Ascension Thursday on the 9th and, to wrap it all up, Pentecost Monday on the 20th.

That adds up to a long month of days off for the average Français. Especially when you factor in the tradition of ‘bridging’ (“faire le pont”) by adding a vacation day between a public holiday and the weekend. Les ponts du moi de mai are welcomed by the French every year as a much-heralded break before the long stretch until summer vacation. Long indeed. Imagine, two months of work without holidays!

So in France at least, April showers bring May holidays.